Food critic Jackie McMillan and I have been friends for some years now. She’s the lovely lady that got me into the food writing game, having been the editor for CityHub for a good stint (a paper which I briefly wrote for), and being the owner and author of Sydney’s finest food blog – Does My Bomb Look Big In This? Every so often, we’ll head out for a bite to eat – generally to shoot the proverbial shit. When Jackie suggested Ibby Moubadder’s newfound Surry Hills gem ’Nour’, with a menu designed by Roy Ner of Owl House fame, and a cocktail list devised by the owner of the same establishment, it more than raised an eyebrow.

Armed with my (admittedly less than adequate) ‘point and shoot’ camera, my lady in crime and I met with Jackie and her ever-colourful and loquacious partner Craig, on the evening of the 7th November 2016.

I thought perhaps we could collaborate on a review of the ‘Modern Middle Eastern’ Mess hall, and after a few failed – yet optimistic – ideas of how we would achieve this, a simple email exchange was decided upon, as the simplest mode of a collaborative review. I begin my exchange to Jackie, as below;

Let me start by saying it was wonderful (as always) to catch up the other night. I do hope this last week have given you time to reflect on the positives and negatives of our experience at ‘Nour’, Monday evening.

Before touching the topic of the food, I’d like to know your opinions on the welcomed lack of ‘hipsterdom’ we seemed to encounter at the restaurant. Apart from what was possibly the most hipster cutlery I’ve ever been furnished with (Do you remember the words ‘Rose Distressed Copper’ being mentioned at any stage?), and the fact that Ibby Moubadder resembled a young Jason Schwartzman, I think the similarities to a Wes Anderson film end there. Ok Maybe the colour scheme.

The decor and use of lights seemed almost reactionary to the onslaught of trendy eateries, while maintaining an element of class and cool. I liked it.

I think you and Sydney both won the cocktail war, with your marginally more masculine beverages, whilst Craig and I sat around like Carrie and Samantha with our fruity aperitifs.

The Pacific Oysters ($5 ea) were Oysters, but I would submit that the real fun began when the Cauliflower Falafel ($18) was brought to the table. My ex-flatmate was a great cook of traditional Lebanese dishes, and I’ve always been a fan of what they do with the vegetable. This dish presented a nod of respect to traditional flavours, with the modern yet modest twist of run falafel mix to the flat side of the cauliflower. Very cool.

I’ll leave it for you to shed some light on the other dishes and hopefully we can get to the bottom of whether ‘No baba ganoush’ was really a bright idea, and subsequently whether it fit with the theme of this new establishment.

Great to dine with you and Sydney in a space utterly devoid of hipster affectations! Maybe they’re just preempting new trends though – because since our adventure into distressed rose copper cutlery, I’ve now encountered a brass version… however I digress.

I liked the décor, it felt modern and open, and with the emphasis on letting light into the dining room at both ends, I suspect Nour would also be a pleasant lunch spot. Ibby Moubadder was indeed handsome and well composed on the floor, dealing with our baba ganoush related-ribbing with aplomb.

Updating a cuisine that we’re very familiar with can be fraught with peril – it’s hard for every update to be better than the original – but I think Nour nailed it with Baby Prawn Felafel ($18/4). No more vacillating between dry or under-cooked centres when there’s a prawn taking up the middle!

And didn’t I catch Sydney scraping up the remaining smoked black tahini for you onto bread? How do you feel about them having a chef solely there to man their bread oven, ensuring we were kept well supplied with pillowy warm pita? Is it taking ‘do one thing and do it well’ a step too far?

And before we take on baba, did you think it’s odd that hummus wasn’t tarred with the same brush? It made a pretty standard appearance – livened up with some pomegranate and lime – under those pleasantly pink slices of Za’atar Smoked Goat ($21), as I recall. (I appreciated that they were well rested slices too – I hate things bleeding on my hummus.) Do you think this favouritism is likely to inflame tensions in the Middle East?

I look forward to your thoughts,

Thanks for your response Jackie. I agree wholeheartedly about the Baby Prawn Felafel. What a winner! The Arabic Lamb Tartar ($22) was nice enough (and gluten free – which was a bit of a lol), but the Lamb Shoulder 400g ($39) pleased me more, I must say.

I’m not sure a dedicated ‘bread chef’ is entirely necessary, but with the amount of covers Nour seats, it’s obvious they have big dreams. Perhaps it is necessary.

Vis-a-vis the Baba / Hummus speculation; I think it’s probably hard enough distancing yourself from one all-time favourite, before even considering to denounce more. You may not make friends with salad – but without hummus – you could make notable enemies. 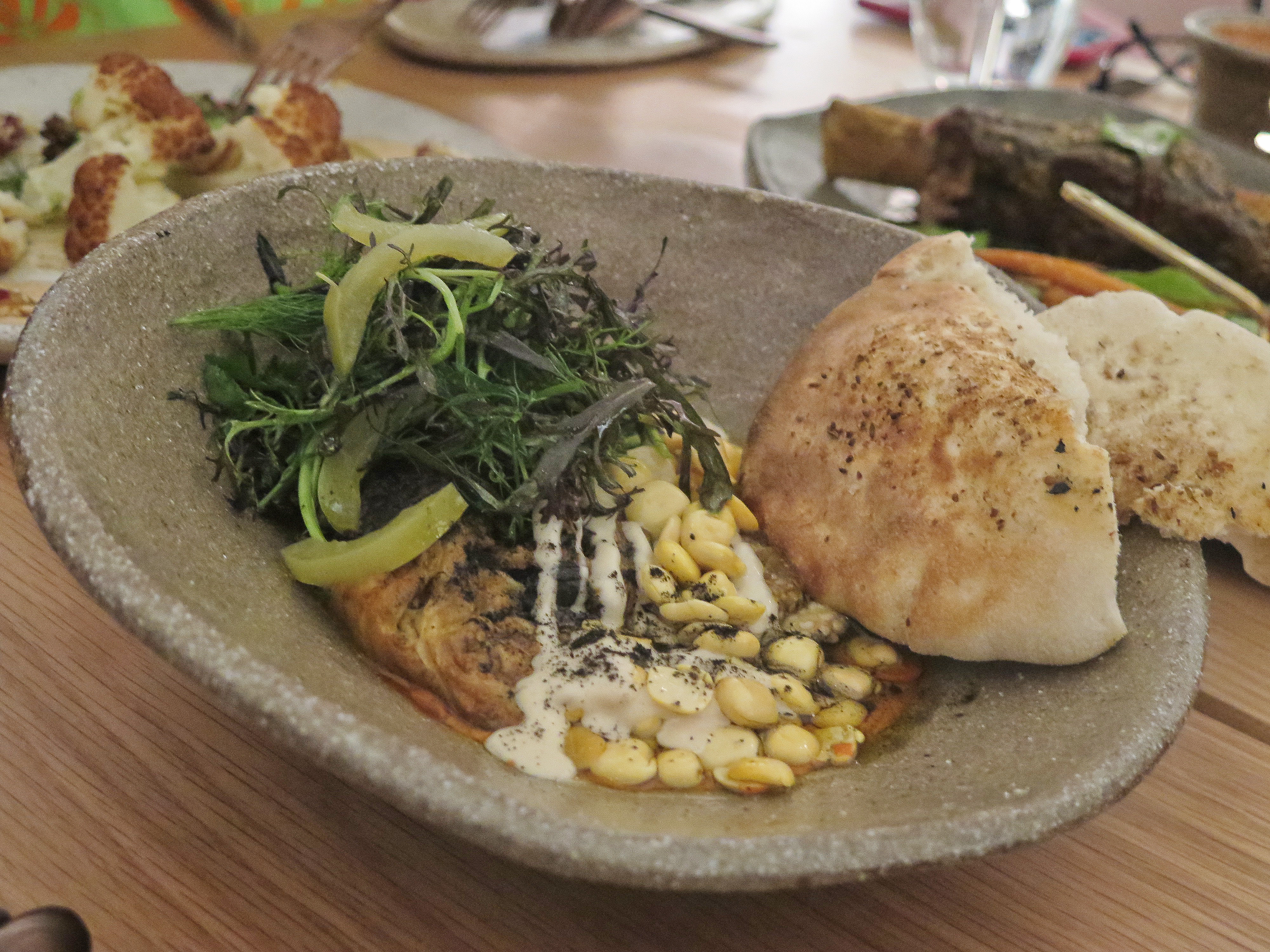 I’ll leave it to your next email to sum up the review, but i’ll just suggest as a topic – Baklava Our Way ($15). Discuss

Sorry for the radio silence… club night weekend. Speaking of clubs, I think the most exciting thing about dessert at Nour was that your super-famous Starfuckers DJ status meant we got sent it all for nix. Loving being your plus one for a change!

While I know the avocado ice cream interior gave Sydney some serious consternation, I was a bit of a fan of the Middle Eastern Bombe Alaska ($16) set on a kataifi pastry bed.

I thought the Camel Milk Mouhalabieh ($17) was clever, with an added a level of funkiness that cut against the sweet; but did they really need to deconstruct the baklava… my two cents worth says, probably not.

They won me on wine though… and I’ve already made another booking.

So where are we dining next?